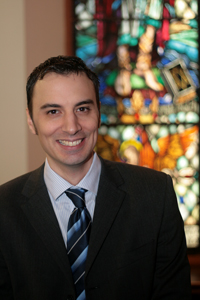 Ross became a Christian in his teens, and felt a call into some form of full–time ministry through helping in a summer camp for refugee children in Greece. He left his home in Glasgow to study at Belfast Bible College in Northern Ireland, and it was here he felt a clear call to pastoral ministry back home in Scotland. From their very first visit to the church in Airdrie, Ross and Deborah both knew this was where the Lord was leading them to live and serve!

In April 2011, Ross was diagnosed with and subsequently underwent treatment for a brain tumour. Read the updates posted during his treatment.