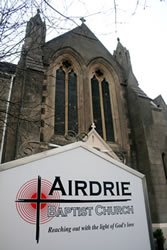 The beginnings of the Baptist Church in Airdrie are closely linked with the historic Haldane movement which deeply stirred the religious life of Scotland in the early 19th century.

Robert Haldane jointly founded a church with John Calder, a local weaver, in 1817. This group met in various places until 1843. Meanwhile, in 1842 a notably successful mission was held in Airdrie by Rev Francis Johnstone of Cupar. This resulted in many conversions and the adoption of Baptist views by the Congregational minister, Rev James Taylor, and some of his congregation.

In true storybook fashion, he resigned his pastorate and became minister of a revived and growing Baptist cause in Airdrie. In 1843 he inspired his people to build a new Baptist chapel at 11 Graham Street. This chapel was regularly used for congregational worship until the construction and dedication of the present building.

Shortly afterwards, Rev Taylor left to go to another pastorate and the church had a struggling existence until 1869 when it appointed a full time pastor, Rev William Fulton.

This gracious man of God laboured faithfully for a period of twenty years, steadily building up the cause under God’s guidance and taking services in the period during which Coatbridge Baptist Church was being formed a few miles down the road. Mr Fulton continued in his ministry at Airdrie until late 1890 and it was a fitting climax to a fine ministry that he should see the new building opened and dedicated on 29 June 1890. It is in this same building that we still worship today.

In 1921 Mr Robert McCracken and others founded a mission hall in Plains. This Gospel work was a great success and the mission hall, in time, became a Church building. We still have a strong relationship with Plains Evangelical Church to this day.

Further ministries, each of which made its own contribution to the life and witness of the church were:

During Mr MacIntosh’s ministry, the church’s pipe organ was installed whilst Mr Hossack was president of the Baptist Union of Scotland during his twenty years of ministry in Airdrie.

In 1998 a young, new minister, Rev Brian More, was appointed and he took the church along new paths of service and outreach. Brian left us in January 2006 to take up a new ministry at Newton Mearns Baptist Church.

Our most recent pastor, Rev Ross Murphy, served in our church fellowship from January 2008 – November 2019.

We are deeply grateful for God’s faithfulness to us since 1843 and are seeking to be faithful in our generation to the Lord Jesus who is the same yesterday today and forever (Hebrews 13.8).