Our Pastor, Ross Murphy, was diagnosed with a brain tumour in April 2011. This page is designed to keep those who are praying for him and his family informed about the ongoing situation without the need to contact the family directly.

Read Ross’ blog for regular updates during his treatment.

Six months have passed since the end of chemotherapy, and still people are asking me for updates and assuring me of their prayers- thank you.

The end of chemotherapy was a great relief, a happy landmark, yet it also brought some trepidation. It felt strange not to be undergoing or awaiting treatment for the first time since diagnosis. I’ve now had a couple of scans since the end of treatment and they have both looked really good, the consultants have been delighted (as have we!)  If my December scan looks as good then I’ll probably be moved to six monthly checks- which would be a real indication of the amazing progress since diagnosis.

My energy levels aren’t what they used to be, but I really have no other physical problems to deal with. I’m doing less than I was before, but enjoying being back in the thick of pastoral ministry amongst people I love.

Thank you for your continued concern, and your prayers, which are powerful and effective.

I’m not sure I was very clear when attempting to give my update a week past on Sunday. I think those present would have seen my feelings more clearly than my progress itself. I was keen therefore, just to clarify where we are with things in the news sheet today.

I’ve now finished my 10th session of chemotherapy and, God willing, have another three to complete. Though I will never be given the all-clear, the progress has been so good that it was almost impossible to see any tumour in my last scan. The next scan is on 2 March 2012.

I should finish my treatment early in May and the expectation is that my energy levels will pick up fairly quickly after that.

My oncologist is optimistic about the prospect of a significant number of years before we need to think about any further treatment, and we are praying – as has been the case already – that such expectations will be surpassed.

We cannot thank you enough for your continued love, support and prayers.

Ross received the results of his latest MRI scan on Tuesday 20 September and the news is good; the chemotherapy treatment has succeeded in reducing the size of the remaining tumour.

Ross has recorded a video update (split over two videos) which you can see below.

Please continue to pray that the treatment will lead to a full healing from cancer.

Watch a previous video update on Ross’ progress below

Ross underwent surgery on Tuesday 26 April where the surgeon was able to remove the majority of the tumour. He came through the operation successfully and was discharged from hospital on Friday 29 April. 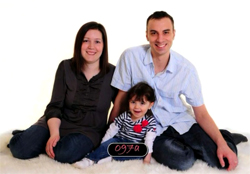 Ross started a course of chemotherapy in June at the Beatson. It is expected that this treatment will last for a year. The aim of the treatment is to prevent growth of the tumour as it is unlikely that the tumour can be completely removed (barring a miraculous healing which we continue to pray for).

The type of tumour is expected to respond well to treatment, and Ross’ age also gives him an advantage in terms of dealing with the course of chemotherapy.

Ross, Deborah and Katie have been keen to express how much the cards, messages and practical help have meant to them these past weeks. They also want to assure the Church family that theyu are very much in their thoughts and prayers too.

Now to him who is able to do immeasurably more than all we ask or imagine, according to his power that is at work within us, to him be glory in the church and in Christ Jesus throughout all generations, for ever and ever! Amen.
Ephesians 3:20–21